Despite the stellar reviews, we do occasionally receive one complaint about our 30 oz tumbler: it's too big. (Who knew there was such a thing?!) For all those people, this is the tumbler for you.

Our 20 oz tumbler has all the same design and sophistication as its big brother, but in a grip-friendly size. Dual walls are cold formed out of 18/8 stainless steel (a.k.a. 304 stainless steel) and vacuum insulated for outstanding temperature retention. A copper lining on the inner wall helps evenly distribute heat or cold throughout your favorite drink.

Cold as the Arctic breeze!!

Got the cup from Black Rifle Coffee; (awesome coffee) as part of the subscription plan. The cup keeps the hot stuff hot and the cold stuff cold for hours on end. Good build quality and "feel". This is perfect for hot and cold days alike, just like a good pair of work boots. I'd probably get another one just of the cup side because of how good it is. BUT...

The lid that came with it however is a major piece of garbage which the design could've been improved by a team of cross-eyed racoons that were hungover from a crack binger. It merely gives the appearance of retaining anything inside of the cup as you'd think. This thing squirts juice more than a hyperactive kid with an Ecto-Cooler Hi-C juice-box on their 8th birthday in 1990. The gasket leaks, the slide leaks, hell any time you look at it after you burn your mouth with the amazing flavor of BR Coffee or after a very cold, refreshing chug of beer, (mind you, after after it's been sitting for four hours because you were working like a beast and earning your keep), it will leak on principle alone. Don't put this in your car cupholder unless you want it to be sprayed with your caffeinated lifeblood and not downed into your pie-hole. Don't put your favorite bourbon in it unless you want it gushing out "ol Faithful" style because it's just ill tempered.

Get the cup because it's good and a value; there should be a celebration in the streets because of this cup to include laughing children, flowing beer, and songs of it's praise. This cup is great!

HOWEVER: F**k the lid, the lid's designers, and the other person and their dog that walked by the lid facility just because they're in the vicinity of these abhorrent lids. This lid needs a lesson in GD&T and implementation of better gasketry.

TLDR; You're better off just being careful with the cup NOT having a lid than trying to put any faith into the lid; it's a habitual promise breaker and flake of it's duties. Two stars deducted because of all the cleaning I had to do, all the costs of spilled liquor/coffee, and all the broken promises the lid gave.

L
L.C.
I love these tumblers

I have a few (about 10) of these Big Frig tumblers and they work great. Always keeps my beverage cold when I'm in Florida fishing or hot when I'm in Washington duck hunting. I can't say enough about this product.. The newly redesigned lids work great too. 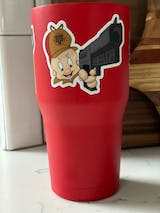 Holds cold well. Haven’t tried it with hot but had ice for 15 hours! But still would like a handle!