Whether it’s your weekly block party or your annual hunting trip, Big Frig’s Badlands 75 is your ideal cooler. With a whopping 75 quarts of space, you have plenty of room to fit anything and everything in this cooler. Each cooler is equipped with a cutting board divider and a basket. Non-slip feet keep your cooler in place at all times Amazing!!!! So glad I bought the big one. It came just as pictures and looks and feel like it's going to be a great addition for camping this summer.

Love the colors! Holds ice for 3 days sitting in the back of the truck under a cover. And the main reason I bought this one is the support that Big Frig gives to my home NASCAR track Texas Motor Speedway. 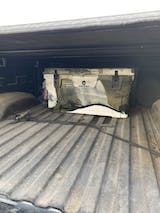 Great cooler! The size is perfect for fitting mule deer! High quality, and well worth the $$

T
Troy Petznick
Everyone Needs One

The 75qt has been awesome for us. We put it to the test right away by going on a 10 day out of state hunt. The divider made it easy to keep it organized.

Rugged, heavy duty, and stays cold on all our trips. This is my 4th Big Frig and my favorite part is the updated latch!

Recently we traveled to western South Dakota on an antelope hunt. Both by partner and I were successful with our hunts and quartered two antelope.
The 75 quart badlands cooler was big enough to hold both animals and a couple of water bottles we froze to pack with the frozen quarters. After returning home, 36 hours later.. the quarters were still frozen to where I could not cut them for final processing. In fact, after 72 hours of being in the cooler, in temps from 65-101 degrees, the meat was still frosted and the frozen water bottles were half ice still.
Unbelievable insulating properties of Big Frig products provide the best option for transporting you valuable wild game.